Ciné-concerts: Murnau at the Auditorium of Lyon 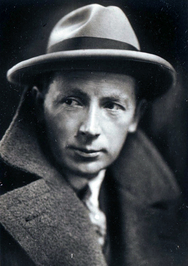 This year, the Lumière festival presents the work of Freidrich Wilhelm Murnau in two major cine-concerts at the Auditorium of Lyon, one with the National Orchestra of Lyon directed by Timothy Brock, and the other an organ accompaniment by David Cassan.

For the sixth consecutive year, the festival continues its tradition of highlighting essential films from the debuts of the history of the cinema in an exceptional screening and acoustic setting.

F.W. Murnau was admired by both Charlie Chapin and Greta Garbo. Eric Rohmer spoke of him as «the greatest of filmmakers.» This esthetic dandy who sharpened his craft at the theater with Max Reinhardt, would take the art of cinema to new heights of beauty and sophistication. The supernatural, magic, and occult powers will haunt his films, from Nosferatu to Sunrise (his grand Hollywood film), from Faust to Tartuffe. Destiny would however catch up with Murnau, living up to a psychic’s prophecy warning him to avoid car travel several years earlier; Murnau died in an automobile accident at age 43. Tabu would be his last film.

Murnau had declared, «I have never understood how a generation who has lived the invention of the cinema from birth to adulthood has not yet witnessed the rise of a veritable poet of the new art.» Murnau was that poet. 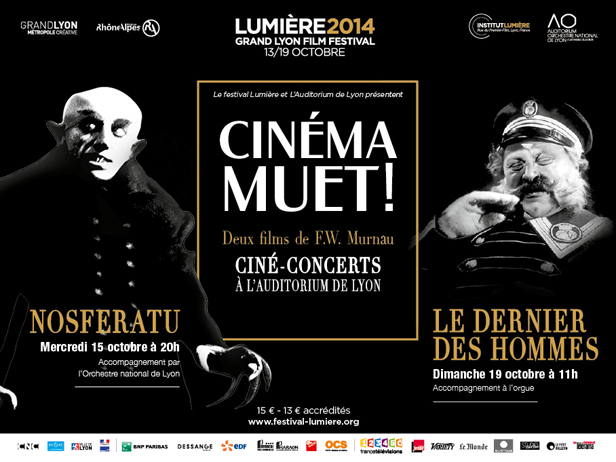 The now traditional Wednesday evening cine- concert with the National Orchestra of Lyon under the direction of Timothy Brock. 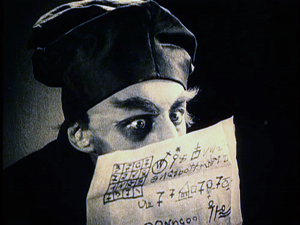 In 1838, young estate agent Hutter must travel to Transylvania to handle a business affair with the Count Orlok. In Viborg, Hutter leaves his innocent wife Ellen, who has the intuition the trip is a bad omen. Indeed, the mysterious Count has spread terror among the inhabitants of the region and welcomes his guest in a most curious manner. Hutter comes to realize that the old Count is a vampire!

Nosferatu was greatly admired by Surrealists André Breton, Robert Desnos, or Georges Sakoul, who said, «For weeks, we repeated, over and over, like an expression of pure frenzied beauty, the line of the scene where the hero makes his way to the foreboding Carpates Castle: ‘And when he had crossed the bridge, the phantoms came to meet him.’»

Nosferatu became a work that lifted silent movies to the level of high art, while also establishing the birth of the fantastic film, creating a genre in and of itself. One could even say that Expressionist creatures like Nosferatu, Mabuse, or Caligari were precursors of a social chaos later manifested by Nazism. However, Nosferatu is, first and foremost, a visual reverie, haunted by death and phantoms. The script is a liberal adaptation – without mentioning it by name for copyright reasons- of Bram Stoker’s Dracula. Nosferatu would remain the absolute reference for the numerous adaptations of the novel to come. The strength of Nosferatu also lies in the opposing view of the Expressionist aesthetic adopted by Murnau. Whereas Caligari embraces a stylized world created in the studio, Murnau chooses to film, for the most part, in natural surroundings: the mountains of Slovakia, the streets of Rostock. The actor Max Schreck, who plays the vampire, will rapidly acquire an aura of mystery.

Lumière presents a new collaboration this year on Sunday morning with a cine-concert accompanied by the organ of the Auditorium (the only organ integrated into a concert hall in France). 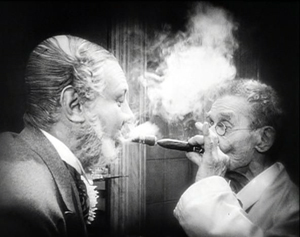 At the Atlantic Hotel in Berlin, an old doorman wears his gold-buttoned, dapper uniform with proud allure. Everyone around the neighborhood greets and respects him. He is admired as a personality who enjoys daily privileged access to the world of the wealthy. But one day, having become too old for his profession, he finds himself re-assigned as a washroom attendant, and must give up his fine fitted coat, his point of pride. Those who had once respected him now despise him, seeing him as the lowliest of men, making him the object of mockery and insults...
The staging is superb, with the camera in perpetual motion, describing the characters, their actions, and their emotional state, without the need for a single subtitle. The lens closely and seamlessly follows the hero’s path, and the entire décor of the palace has been recreated in the studio, allowing for expert maneuvers of the camera.

Marcel Carné remarked, «Under the visual mastery of Murnau, the camera glided, ascended, soared, or weaved in and out, in every scene necessary to the intrigue. The camera was no longer conventionally static, but had become a character of the drama itself.»

Nonetheless, the film would be nothing without the astounding performance of Emil Jannings, one of the greatest actors of the silent era.

The film critic Edmond Epardaud noted in 1925, «An actor carries all the weight of the film, and it’s Emil Jannings. Through the nuanced finesse of his acting, he proves that he is one of the greatest transformative actors who has ever graced the world of cinema. His importance is such that we can ask ourselves if the film would have had the same beauty and impact without him.»

The National Orchestra of Lyon (ONL) 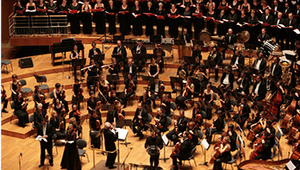 Heir to the Society of grand concerts in Lyon founded in 1905, the National Orchestra of Lyon (ONL) became a permanent orchestra in 1969 with its first musical director, Louis Frémaux (1969-1971). Since then, it has been administered and funded by the City of Lyon, which endowed it with a concert hall, the Auditorium, in 1975.
For over a hundred years, the ONL has been led by prestigious conductors, from Charles Munch and André Cluytens, Sir John Eliot Gardiner and Marek Janowski, to Armin Jordan, Alan Gilbert, Georges Pretre or Neeme Järvi. Considered one of the finest European orchestras, the ONL has played alongside many world-renowned soloists such as Pablo Casals, Arthur Grumiaux, Wilhelm Kempff and more recently Yo-Yo Ma, Martha Argerich, Vadim Repin, Truls Mørk, Radu Lupu, Krystian Zimerman, Jean-Yves Thibaudet...

American composer Timothy Brock has mastered the musical illustration of the great works of the silent era. He has given us the music to Diary of a Lost Girl by Pabst, Sunrise by Murnau, La P’tite Lili by Cavalcanti, The Cabinet of Dr. Caligari by Robert Wiene or Nanook of the North by Flaherty. Timothy Brock plays an active part in preserving the musical heritage of Charlie Chaplin and has composed new scores for four masterpieces of Buster Keaton, including Steamboat Bill Jr. and The Mechanic of the General. He has presented his work in prestigious venues, from the Cineteca of Bologna to the Konzerthaus in Vienna, to the New York Lincoln Center or the Barbican Centre in London - and with larger ensembles – the Symphonie-Orchester of Berlin, the Los Angeles Chamber Orchestra and the National Orchestra of Lyon. At the Lumière festival, he led the musicians of the National Orchestra of Lyon in the screening of Tabu by Friedrich W. Murnau in 2009, The Cameraman by Edward Sedgwick in 2010, as well as Lulu (Pandora’s Box) by Georg Wilhelm Pabst in 2012. 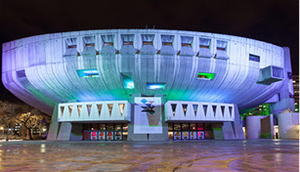 The Auditorium of Lyon

The enormous fully-prestressed concrete monolith, the Auditorium of Lyon is an impressive structure in the heart of the Part-Dieu neighborhood. Designed by Charles Delfante, urban planner and chief architect of the Part-Dieu, and by Henri Pottier, Grand Prix de Rome, the Auditorium was inaugurated on February 14, 1975, after over three years of colossal work that required nearly 40,000 tons of concrete and 830 tons of steel!

The Organ of the Auditorium 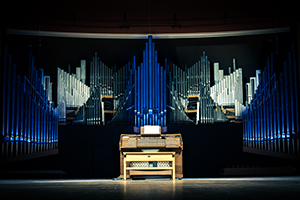 Built for the World’s Fair in 1878 and the Trocadéro Palace in Paris, themonumental instrument (82 keys and 6,500 pipes) was a showpiece for the renowned French organ builder, Aristide Cavaillé-Coll.
Installed in Lyon in 1977 by Georges Danion, the organ was first entrusted to the talent of Patrice Caire. It then experienced a slow decline. The residency of composer and organist Thierry Escaich between 2007 and 2010 restored the instrument’s artistic splendor, displayed today in a variety of programs- orchestral concerts, chamber music, recitals, cine-concerts, educational concerts. The organ of the Auditorium is to date the only grand organ of a concert hall in France. It has just undergone further restoration, completed in November 2013.